yahoo imap and STMP server, FREE to ALL

According to Wikipedia, Yahoo has free IMAP services.
"Free IMAP and SMTPs access
It is possible to get direct IMAP access without signing up for paid access nor using software like YPOPs! or FreePOPs. Yahoo operates IMAP servers (imap.mail.yahoo.com in particular), which are globally accessible. However they require a specific, but non-standard IMAP command to be sent before login is done. The command is: “ID ("GUID" "1")” and it is relatively easy to modify any email client to send it. In fact this is the method currently employed by YPOPSs! and FreePOPs. There are modified version of Mutt and Mozilla Thunderbird available that send this command.[23]

There is also an IMAPs server running at imap-ssl.mail.yahoo.com. It is using SSL on the standard port 993.

http://en.wikipedia.org/wiki/Yahoo!_Mail…
Posted by Tiebing at 9/21/2010 No comments: Links to this post

go to file cherokee/util.c line 400, changed it to:


#if defined(HAVE_PTHREAD)
now you are good to go, just type make and the final files are in cherokee/{cherokee,cherokee-worker}

To run Cherokee on an embedded platform:
1. download cherokee-worker, cherokee
2. create a conf file with the following contents:


3. create a themes directory with the followings files:

You can enable tracing to see the traces of cherokee.
Posted by Tiebing at 9/17/2010 1 comment: Links to this post

Use 'uname -a' to get kernel info

Use 'cat cat /etc/debian_version' to find out debian release info

This table is from http://www.ozvoip.com/voip-codecs/devices/

Recently I start to investigate how to make asterisk to be an SIP BPX with small foot print, and I have a running SIP PBX now. Below are the notes on how I got it to run.

Platform: I am running asterisk in Colinux under Windows Vista. Debian 5 is running in Colinux.

version: asterisk 1.4 is stable and used widely. 1.6 is considered short-term support. Supposedly 1.8 is another stable version for long-term support. I use 1.4
source : the source tar gzip of asterisk is about 23MB. It uses the standard "./configure;make;make install" procedure to compile. See README in source tar ball.
structure: asterisk uses a lot of ".so" dynamic libraries, which are called modules and are loaded dynamically when program starts. Which one to load or not to load is controlled by the file "modules.conf". Many of the modules are essential to make asterisk useful, while others are optional for our purpose.
directories: configurations are under /etc/asterisk, modules (dynamic library files are under /usr/lib/asterisk/modules). Other directories are determined in compile-time and are listed in "asterisk.conf"
configurations: Unlike most unix programs, "asterisk.conf" is not what you change the most. In fact, you can probably leave it as is. The files we need to change the most for making a IP PBX are: 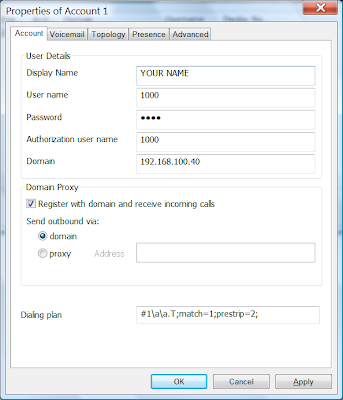 You can get it from any of the following providers:

I use Google voice and SipGate. Any one has used IPComms?
Posted by Tiebing at 9/02/2010 No comments: Links to this post

MOS is what nontechnical people think about each codec (5.0 is perfect). All of the above numbers are in EACH direction, so total bandwidth is double the above figures.

It would be a very good idea to turn on silence suppression ('Silence Supp Enable' = 'yes'), because it will reduce your bandwidth usage by 65%. (Apparently each person in a two-person conversation only talks about 1/3 of the time.) With my Sipura 2100, I could not hear any difference between silence suppression being on or off.


G729 uses less compression (less latency problems) and has a higher level of voice quality BUT does use more bandwidth. I personally am not fond of g723.1 but usually find g729 to be OK. Some people despise both.

Packet8 started using g723.1 and later switched to g729 most likely due to customer complaints about the poor quality of g723.1 calls.

After trying a number of things, I upgraded to the latest firmware (5.1.5 at time of writing) and after some more stuffing around, I was finally able to get the following line to populate the Personal Directory:

A few things about the command.
Firstly, the command will enter in two contacts in the Directory. These will be under entry #5 (24686) and entry #2 (25390). A complete list of all the codes here can be seen in the source of the Personal Directory page in the phone’s web interface.
So taking the first of the two entries (24686), what we’re posting is:

n%3DGeoff;
n=Geoff; (we need to escape the ‘=’ signs so that wget will actually pass the info on correctly)
n is the Display Name that will appear in the Directory

r%3D1
r=1
r is the ring to use. 0 is no sound, just flashing. Play around with the other numbers to find the ringtone you want to use.
To add more than one entry at a time, simply separate the strings with ‘&’.
Posted by Tiebing at 9/01/2010 No comments: Links to this post